Mijntele2 Webmail
Title here
Menu
Menu
Zoeken
P
Hi! I have a question: how can I write complain against Arjan van Tele2 and ?
icon

I told you in the other topic.

Have a nice weekend


You asked about your dsl connection, how much you'd still have to pay after cancelation, that was 22€,-

After that you say you got another bill, a bill that you supposed that it might be from a mobile simonly contract, in the topic over your landline connection the moderator asked what kind of payment request you got, you had 20 days to respond or to just look at the bill and reminders to figure out this was from a mobile contract.

The excuse that Google translate doesn't work for simple short texts, it's BS... If you had used it, you would have found how to write a complaint online 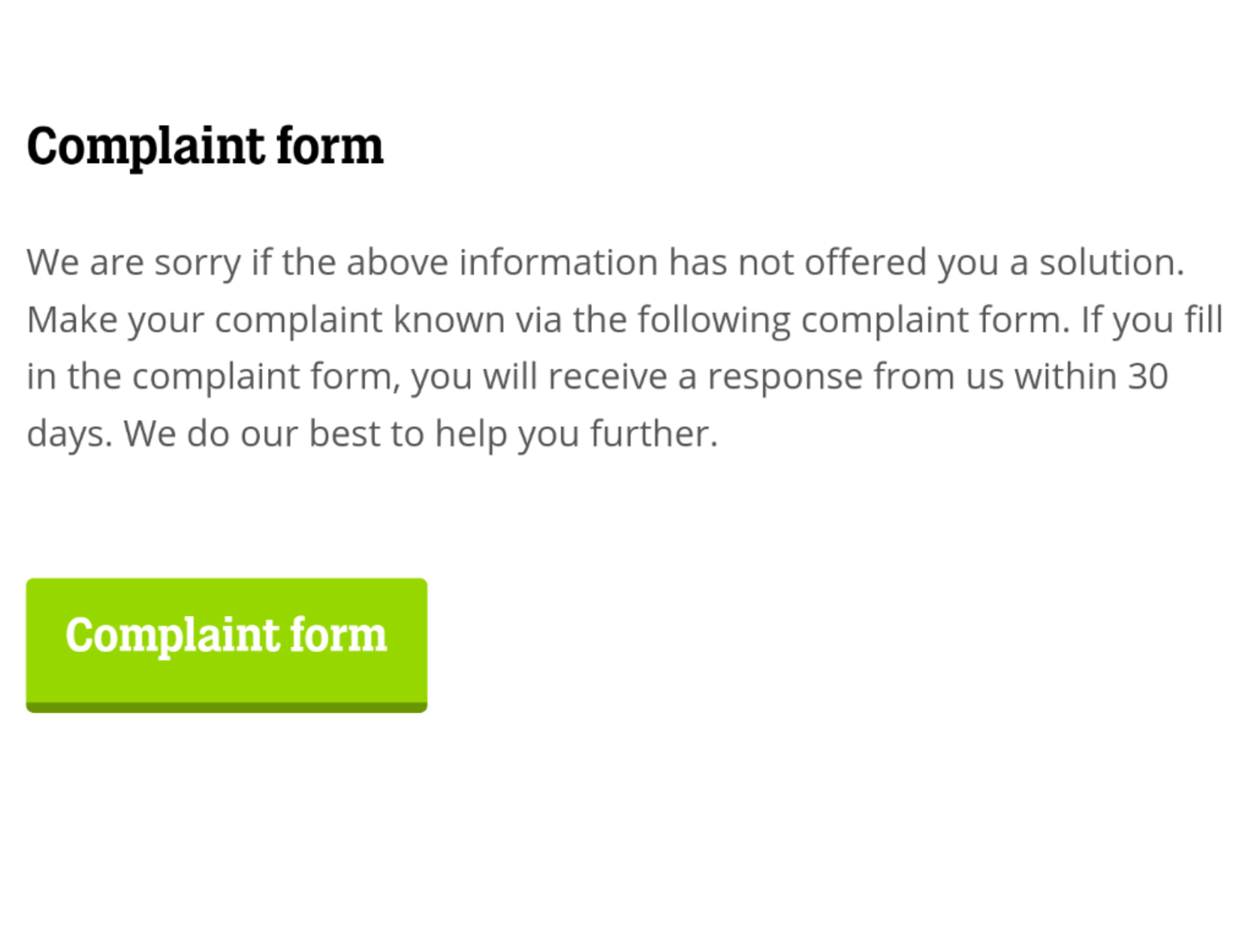 This is a translation of a bill notification mail

"The new monthly bill for your mobile subscription is ready with invoice date 26-03-2018 and a total amount of € 7.29. Log in to MyTele2 or view your invoice via the MyTele2 app."

Doesn't seem funny and very understandable, of course you wouldn't wanna translate a book with it, but it's good enough for understanding a simple letter or email.

Anyways, you already know how to write the complaint, I suppose, after being told 5 times where and how, what's the question here? After you send the complaint Tele2 will answer within 30 days, and if you aren't happy with their answer you can take further steps, but the first thing a place like the juridische loket Will tell you is to pay the outstanding bill and the extra costs for the collecting company, if you win the case or settle it with Tele2 you'll get your money back, if you loose, there is a risk that a bill+ 40€ collecting taxes might turn in to a bill of hundred of euros..

New question: Few minutes before I found 3 direct debits from Tele2. Because I don't know why should I pay you(our contract terminated, etc), I canceled it. Please explain what happen, and why you did this?

3 contracts, 3 direct deposits. So, it's not my fault that Kevin did not checked it - he had everything to provide correct answer (question regarding deposits, address, zip code, etc)

Stay on topic, you did not get the right awnser. Please somebody at Tele2 close this useless topic

It's my topic, not your. And you, Tele2 fanboy, can't know what for me useful, and what is not.
P

The main problem is credit score. The second problem is justice(I want personal and public apologies from Kevin and management. In the best case apologies for packetloss and this history with bill). The 100 EUR important, but not much.
But thank you very much for your long answer and attempt to understand what happen!

+1
If it is yours topic then take it to your home.
P

If it is yours topic then take it to your home.

I'll ask to close it myself if bill will be withdrawed, I can pay directly to Tele2, and after apologies from Kevin and/or management.
P
How the NL credit score works? If I pay for collector company right now (after few days, I need a time to transfer money between countries), and If tele2 management will agree that something wrong in my case, can they delete this event from the credit score?

+2
In the other topic I see a few attempts to clear the difference between the landline and mobile bill. 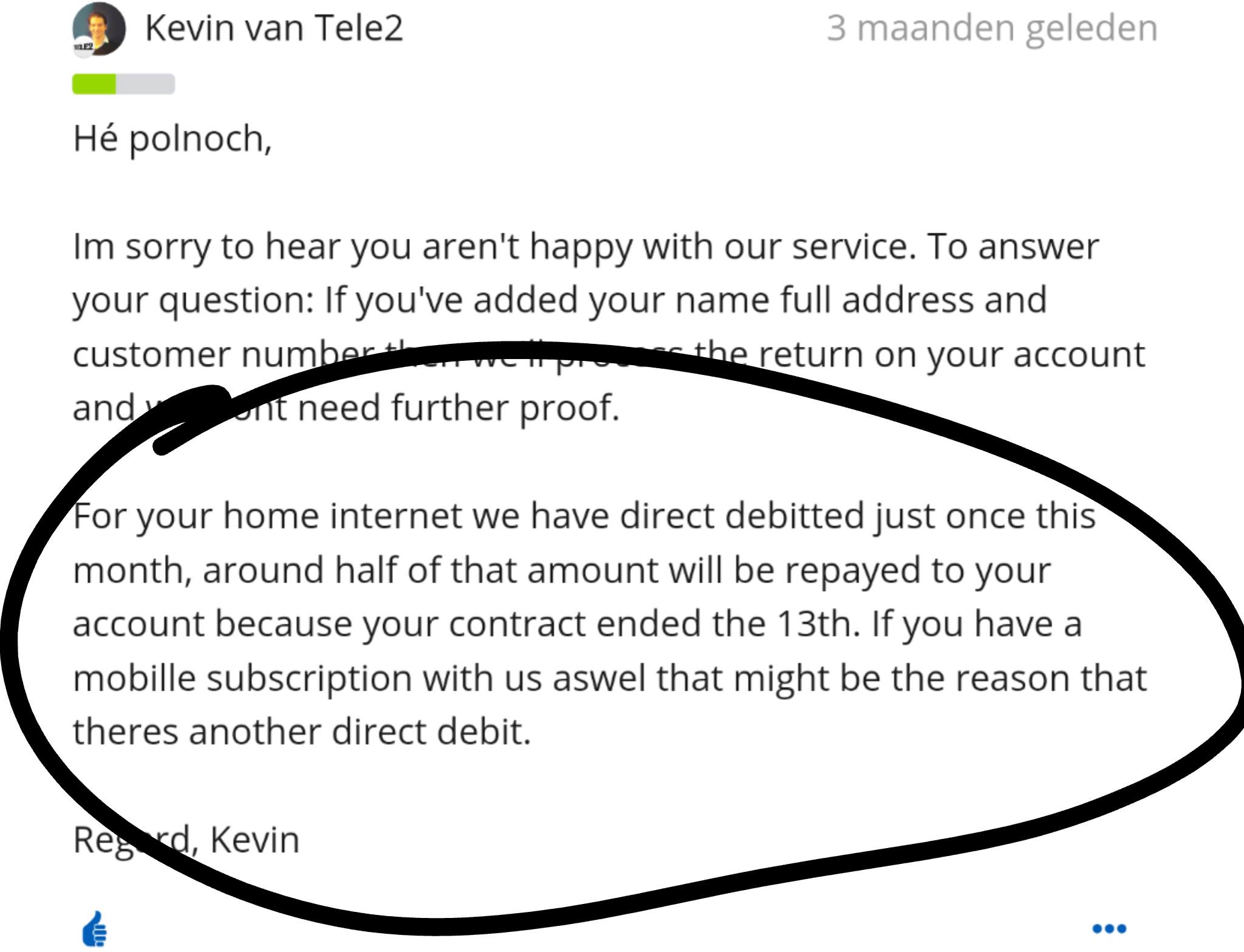 And that if a debit fails you'll get another reminder 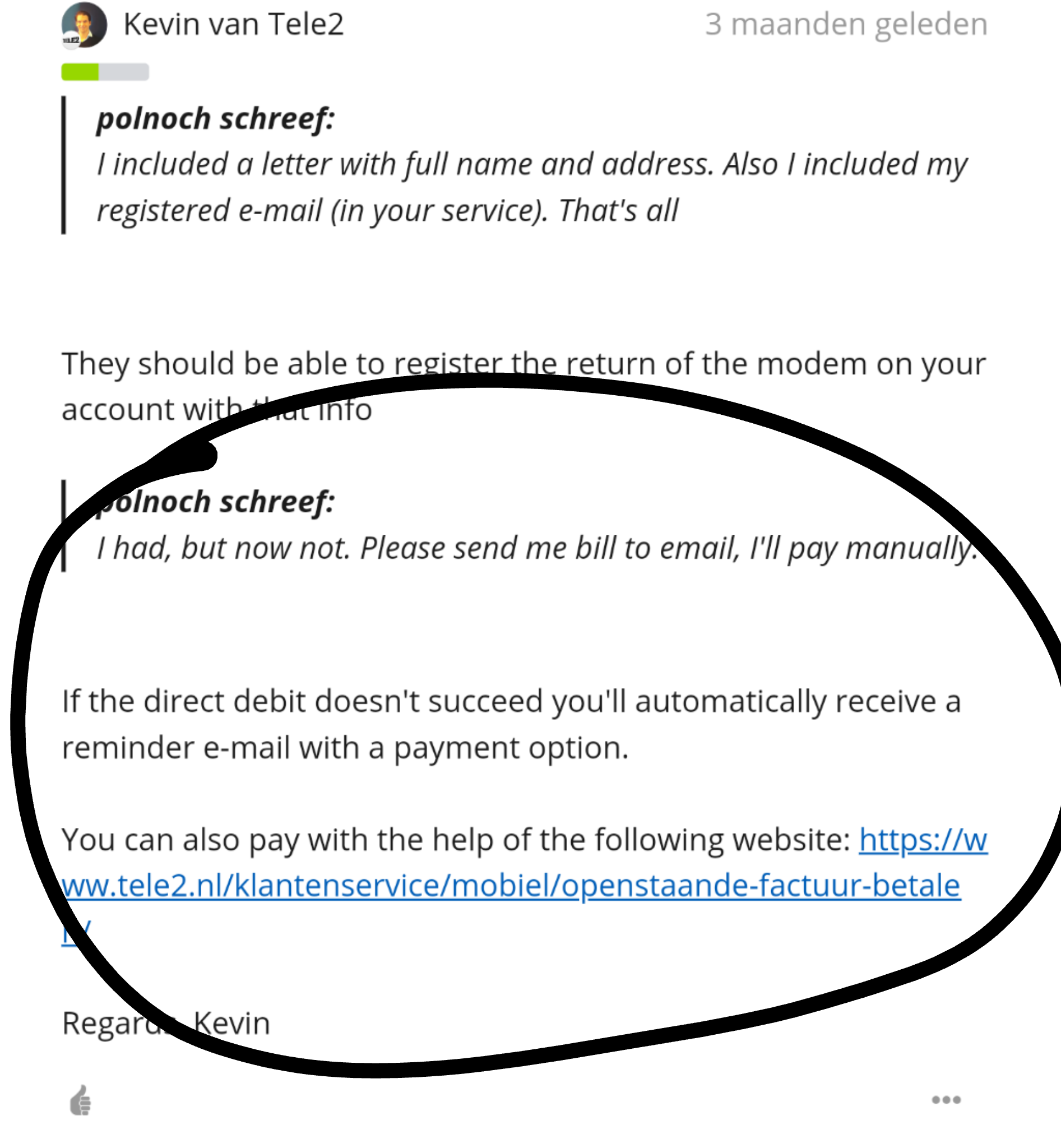 And the moderator in question asking for the invoice number, because in the landline connection there weren't any other open bills. I imagine that you cancelled everything but you weren't aware of the fact that Tele2 mobile debits are delayed one month, I see where a miscommunication might have happened where a moderator responsible for the landline connection clears out the last bill you'd get and how much they'd debit / credit it based in your use, and a month or so later you got another bill, probably from the already cancelled mobile contracts, the company has certain obligations of warning the user about the open bills before redirecting your case to a collecting company, I don't know if they did everything by the book and I and other forum users are not the ones to judge who is right here.

But as I said, I sincerely recommend paying the bill while making it clear to Boss that you don't agree with it.

Write a registered letter to Tele2 with your complain, give them the necessary time to respond, upon a negative or no answer, escalate the complaint to "de geschillencommissie" httpss://www.degeschillencommissie.nl/over-ons/commissies/telecommunicatiediensten/ or to the juridische loket https://www.juridischloket.nl/

In any case paying the bill, will avoid costs running sky high, collecting companies have just one goal in mind, set as much extra costs as possible and allowed by the laws, the only way to stop it if paying and afterwards trying to get it back.

After paying, they will take your name out of Preventel, the organization where people with Telecom debts are registered.

On the banking credit score side of things, this have no effect, on private companies like Experian, I've no idea to be honest.

P
thank you for your long answer.

I've attached screenshot of complain form. Tele2 officials, could you please explain me, what to put in the "Klantnummber"? I don't know my Customer number. And which address I have to fill - my current or my previous address in a time of contract?

You client number should be in the contract you got on your email, and maybe in your forum account.

Also in the letters you got from Tele2 you might see it there.

Enter your username or e-mail address. We'll send you an e-mail with instructions to reset your password.